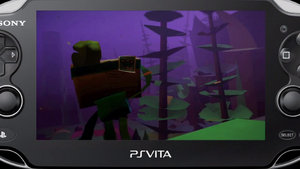 Sogport is the area which Iota/Atoi journey through in Tearaway. In the "Tearaway Sogport Trailer", Sogport is said to be found by "its noise and its stench". This is because it is full of factories. The whole place is surrounded by a sea of glue. The music for Sogport is The Sogport Song wich is also included in the Tearaway Competition Pack for LittleBigPlanet.

The Tearaway Wiki has a collection of images, videos, and other types of media about Sogport here.
Retrieved from "https://tearaway.fandom.com/wiki/Sogport?oldid=5372"
Community content is available under CC-BY-SA unless otherwise noted.