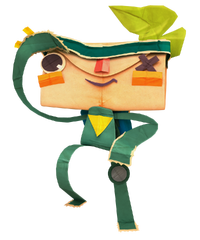 Iota is the male counterpart of Atoi and is one of the main protagonists of Tearaway and Tearaway Unfolded. He contains a special message within his envelope shaped head, and must deliver it.

Iota is a small letter that falls into the Tearaway world at the beginning of the game. Pieces of paper then surround him, and become parts of his body. This is when he wakes up, and the adventure begins.

Iota is able to... Read More

Community content is available under CC-BY-SA unless otherwise noted.
Advertisement